When the tool is lowered to the fish top for 2-3m, start the pump to wash, slowly lower the drilling tool to the fish top, add 10-20kn of WOB, and control the rotation speed within 50-100r / min. the displacement shall be determined according to the size of the annulus, the depth of falling objects and the performance of workover fluid to ensure that debris is brought out of the ground.

The inner diameter of the sleeve milling pipe shall be 4-6mm larger than the outer diameter of the pipe string coupling or joint, and its length shall be about 0.2m longer than the length of a single piece of falling object. When the pump is stopped due to the need of connecting a single piece in the casing milling, the drilling tool must be lifted up to make the tool lift away from the falling position, and the drilling tool shall be moved repeatedly. Before stopping the pump, the circulating displacement shall be greater than 300L / min and the time shall not be less than 30min. After milling and well flushing, the mechanical impurities in the inlet and outlet liquid samples are basically the same. After the casing milling footage in the open hole is 2-3m, the tool shall be lifted up to above the fish top immediately, and the casing milling shall be carried out after confirming that the drilling tool is not stuck, and the circulation shall be maintained during the lifting and lowering process.

If there is no footage or serious skip or reverse occurs in the middle of the process, the causes shall be analyzed in time and the next measures shall be studied.

During milling, the casing shall be protected, and 2-3 drill collars or centralizers shall be added to the drill string in advance. 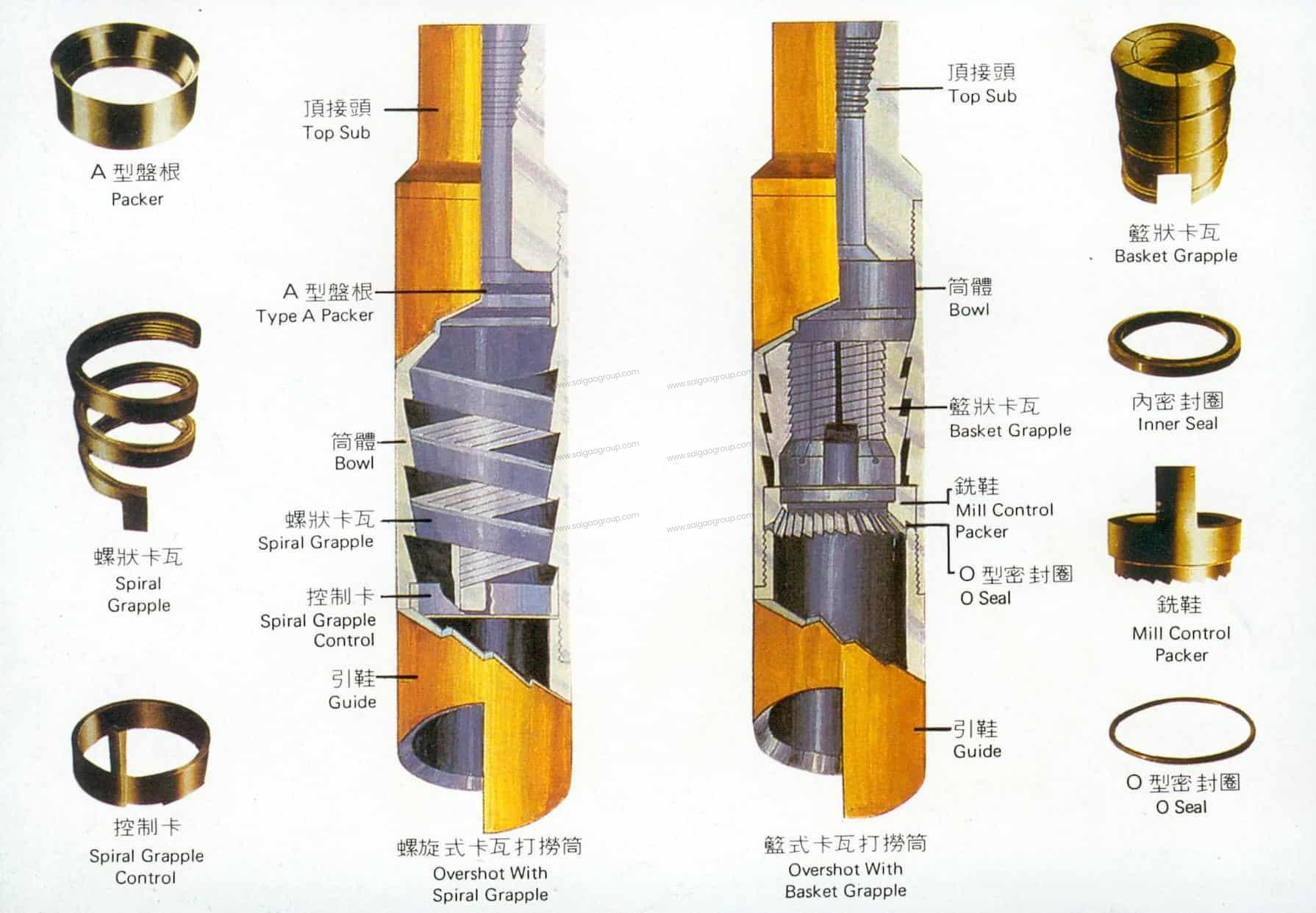 When the tool is lowered to the top of the fish for 2-3m, it can be washed by the pump, slowly rotated and lowered to the fishing area. When the suspended load drops by 10-50kn, the drilling tool can be lifted up slowly. If the suspended load increases, it means that the tool has been fished, then the tool can be pulled out. If the length of falling object is short and it is difficult to judge the hanging weight, the drilling tool can be lifted up 1-2m, and the above operations can be repeated for 3-4 times, and the drilling can only be started when the fish is touched, and the drilling can be pulled out when the running is blocked.

When the pump pressure reaches a certain value, slowly lift the drilling tool. If the suspended load increases, trip out. If the depth of the well and the weight of the falling object are light, which makes it difficult to judge the hanging weight, the above operations can be repeated to fish for 3-4 times before tripping out.

The retractable slip overshot & nbsp; & nbsp; is close to the top of the fish, rotates, lowers and circulates to the fishing side. When the pump pressure rises and the suspended load drops, the drilling tool is lifted slowly. If the suspended load increases, the fishing is carried out and the drilling is lifted. If it is necessary to exit the tool, it can be seen that the drilling tool quality can be hit down, and it can be lifted while rotating, and then it can exit.

When the tool is lowered to 1-1.5m from the fish top, remember the hanging weight and slowly lower it down. If the fish is blocked, rotate the drilling tool at different angles. After the tool enters the fish cavity, lift it up for a long time and catch the falling object. If the hanging weight is increased, fish it out. If the card is stuck and can't be released through activities and other measures, reverse buckle measures can be taken. The reverse buckle method is the same as above.

After a long time of running down to fishing, when it is confirmed that the thread making is achieved, add 20-30kn of WOB, make the thread at the speed of 10-20r / min, and lift the thread making for 5-10 laps. If the suspended load is increased, trip out. If the suspended load is not increased, repeat the above operations. When tripping out after making up the buckle, if it is stuck and measures such as movement, pressure holding and rotation cannot be taken to release the buckle, lift up the drilling tool to the designed reversed load for the reversed buckle. If the suspended load gradually drops to the originally suspended load or slightly larger and the torque drops, it is proved that it has been fished up or reversed. After slowly lifting up to the normal load, normal tripping out can be carried out.